Chet Buchanan and Tracey Vlahos will host the Awards on Saturday, November 19 from the South Point Hotel.

The Award is presented to a female Entrepreneur who not only strives to build a great company, but also contributes to the success of other Women Entrepreneurs.

The Award honor an individual’s extraordinary distinction in Lifetime success & recognizes Leaders who have maintained a professional lifelong commitment to Education in Las Vegas/Clark County & Great state of Nevada.

SSA honors and recognizes excellence and exemplary achievements by individuals and companies in the great state of Nevada. The “Silver State Awards” are the only on stage production awards presentation of its kind that is in English and Spanish. 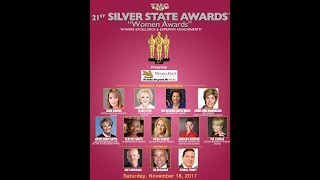